Body odour or bromhidrosis as it is medically known is a condition characterised by the skin giving off an unpleasant or even offensive smell.

It can be very mild, smelled only by the person suffering from it and easily hidden with deodorants or perfume, or it can range to being very severe where it is easily smelled by passing people.

When it is severe, it can be a very socially debilitating problem that is often poorly understood by those people who do not suffer from it. Unfortunately this often leads to jokes about people with body odour or ‘BO’.

The miraDry system works by using a microwave energy to destroy the eccrine sweat glands which produce watery sweat and the apocrine glands that produce the sebum responsible for causing underarm odour.

The miraDry system destroys the apocrine and the endocrine glands

These people are suffering from true bromhidrosis or body odour.

In virtually all of these people, the bromhidrosis or body odour is caused by excessive activity of some glands in the skin called the apocrine glands. 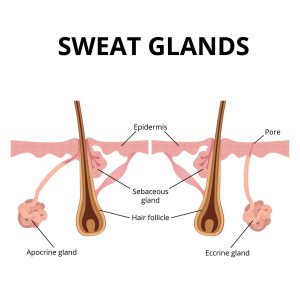 Each apocrine gland empties into a hair follicle. The sebum is produced to lubricate the hair as it grows in the follicle and pushes out of the skin.

Not surprisingly, most of the apocrine glands are found in the areas of the body where hair grows – the scalp, armpits and groin. Also, as would be expected, it is during puberty when the bromhidrosis or body odour starts when the sex hormones stimulate the pubic hair growth and of course the apocrine glands.

Throughout the whole of the person’s reproductive life, the continuing presence of sex hormones continues to stimulate the apocrine glands causing bromhidrosis particularly from the armpits and groin.

Although the hair on the head is often “greasy” due to this overactivity, the fact that the head is usually uncovered and has good airflow around it means that this is rarely the source of any concern about bromhidrosis or body odour.

It is usually the armpits that cause most concern. The reasons for this include the fact that when we wear clothes, air does not circulate so freely and so any smell is kept in the area. If we get embarrassed by this, we tend to wear more clothes, worsening the problem. In addition, as the axilla is closer to the nose and to other people’s noses, it is often more noticeable than the groin.